The Queens of Darkness have arrived in Storybrooke!  The midseason premiere doesn’t disappoint, jumping back into the thick of things quickly.  In this episode, expect to find out how Rumple plans on getting back into Storybrooke and how progress with the author is going.  Enjoy!

The episode begins with a flashback to the Forbidden Forest with Rumple and the Queens of Darkness; which includes Maleficent (Kristin Bauer), Cruella de Vil (Victoria Smurfit), and Ursula (Merrin Dungen).  Things appear to be quiet in Storybrooke, with no villains to deal with at the moment.  Snow is back at her teaching job, and Regina is back to being Mayor.  Hook and Belle have a heart to heart in the library while looking for a way to get the fairies out of the hat; basically about how Rumple screwed them and love is hard.

Outside of Storybrooke, Rumple is working on some master plan of his to get back into Storybrooke with his new villain super-team in tow.  With Ursula and Cruella on board with his plan for the villains to beat the heroes to the author, they head to Storybrooke.  Emma and Regina share a cute moment over a kale salad and their friendship has clearly progressed nicely since the last time we saw them.  Apparently Regina hasn’t been having much luck finding the author and is discouraged, but Emma reassures her that they will find him.  Belle and Hook conveniently find a professor to help them decode something necessary to free the fairies, so Regina performs the ritual and the fairies are free, but what the gang doesn’t notice is some black beast coming out of the hat afterwards.  No rest for the weary in Storybrooke!

In another flashback, we discover Rumple worked with the Queens of Darkness in the past and screwed them over; leaving them for dead to fight off the black beast aka the Chernabog.  In present day, Rumple and crew have reached the Storybrooke town line and when he reveals he hasn’t been telling them the whole truth they freak out and threaten to shoot him.  He asks them to trust him and says he will get them into Storybrooke first, and then is trusting them to bring him in afterwards.

Everyone is celebrating at Granny’s when they realize they have a problem on their hands with the Chernabog.  Regina and Emma team together and use some Swan Queen magic to fight him off, but they know he isn’t gone for good.  This is where Cruella and Ursula come into play and they call Regina from Rumple’s phone and say they can tell her how to get rid of the beast if she lets them into town.  Desperate times call for desperate measures, so Regina agrees to the terms.

Apparently the beast is after the heart with the most potential for darkness, so naturally they all assume it’s after Regina.  Emma tells Regina they aren’t offering her up as a sacrifice, so they’ll have to try to drive the beast out at the town line.  Emma and Regina take off in the Bug and the beast is on top of them when Regina poofs out of the vehicle, hoping Emma can at least make it out of this. AWW, they’ve come so far! Best friends.  Emma manages to hit the brakes at the last minute and the beast goes flying over the town line.

Snow and Charming show up at the town line to try to stop them from letting in Ursula and Cruella, but Regina says they deserve a second chance too and they let them through.  Snow and Charming end up having a secret meet up with Ursula and Cruella later, and it turns out they’re hiding something.  Snow says they need to keep their mouth shut about what went on between them before.  Ursula and Cruella then go let in Rumple, who says he knows a way to bring back Maleficent because she isn’t quite dead or something.  He also admits he was behind the “professor” email and the beast being released from the hat.  Rumple is back in Storybrooke and ready to cause more problems for the heroes!

What did you think of the midseason premiere?  Comment below! 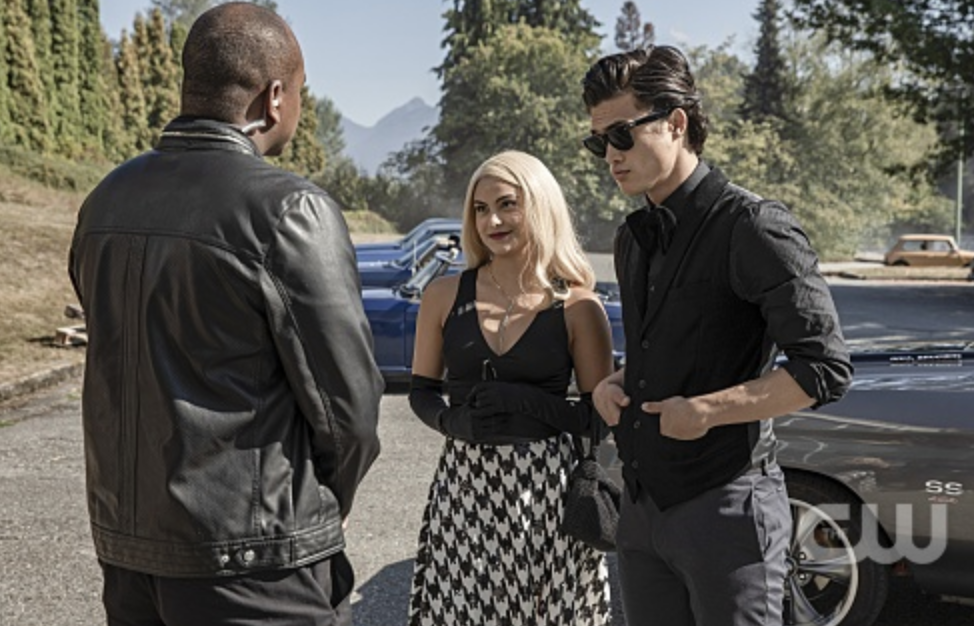