In honor of the 30th anniversary (has it really been that long?!) of the movie Aliens, and to promote the upcoming ‘Alien Invasion,’ a marathon of all four Alien films on SundanceTV, the network presents ALIENS!!! The Contest, exclusively on Tumblr from August 18th to September 9th!

Anyone with a Tumblr account and a great imagination is invited to make original, “Otherworldly” alien creations to be featured on air! Submit your artistic rendering, GIFs, paintings and more – Your creativity is the only limit on digital composition submissions! – through SundanceTV’s Tumblr account.

Check out a promo video for ALIENS!!! The Contest here.

The top three finalists’ creations will be shown on air during the “Alien Invasion” on SundanceTV, September 18th thru September 20th, with one winner revealed each night. Winners will receive additional exposure for their art via Sundance.tv and on the network’s Tumblr account. 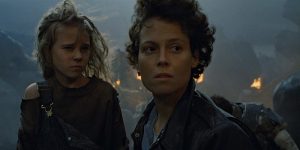 The contest will be judged by employees of the creative departments of SundanceTV and Tumblr, with help from Special Guest Judge, Carrie Henn who portrayed fan favorite Rebecca “Newt” Jorden in the movie  Aliens.  Henn, who was only 10 at the time, will also be featured in exclusive interstitials for SundanceTV’s social platforms, giving her unique perspective for fans as she reflects on her experience as part of this iconic franchise.

Complete details and rules for ALIENS!!! The Contest are available here.

Superman & Lois finally brought us into Bizarro World to see our characters’ counterparts. It was a fun, quick ride to see what...

THE CW LAUNCHES NEW CW APP The CW Network is launching a brand new CW App. The app will be the exclusive home to The CW’s latest...