Van Jensen and Dennis Calero Will Bring the First 007 Tale to the Pages of Comics this October. 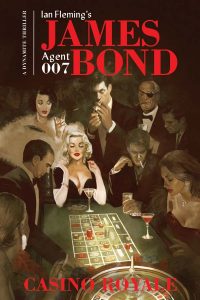 Award-winning writer Van Jansen (The Flash, Green Lantern), and artist Dennis Calero (X-Factor) have been selected as the creative team to bring the very first James Bond novel, Casino Royale, to the pages of comics for the first time in the series’ history. Set for release in October 2017, the 160-page graphic novel will transport 007 fans back to the 1950’s with its stylish artwork and classic story.
Ian Fleming’s literary debut of British Secret Service agent 007 is stylishly adapted to the sequential art medium by Van Jensen and Dennis Calero in the official  James Bond: Casino Royale graphic novel. Sent to a French casino in Royale-les-Eaux, Bond aims to eliminate the threat of the deadly Le Chiffre by bankrupting the ruthless SMERSH operative at the baccarat table. However, when the luck of the draw favors his enemy, 007 becomes the target of assassins and torturers in a high-stakes game of cat-and-mouse.
A former crime reporter and magazine editor, Van Jensen is the author of the critically acclaimed graphic novels Pinocchio, Vampire Slayer and The Leg. He has also written such series as Green Lantern Corps, The Six Million Dollar Man, and The Flash.
In 2014, Dynamite Entertainment secured the license from Ian Fleming Publications Ltd to produce the first James Bond comics in 20 years. The first series, written by Transmetropolitan writer Warren Ellis, launched the following year. Subsequent James Bond story lines include Diggle and Casalanguida’s Hammerhead and Kill Chain, James Robinson and Aaron Campbell’s Felix Leiter, Benjamin Percy and Rapha Lobosco’s Black Box, and Kieron Gillen and Antonio Fuso’s Service Special.

An All-Out Flerken Invasion Challenges Carol Danversto Go Higher, Further, and Faster Than Ever! IDW Publishing is proud to...

About A Series of Unfortunate Events Season 3: Based on the internationally best-selling series of books by Lemony Snicket (aka...

Adi Shankar, the nerd-icon producer behind Netflix’s highly successful Castlevania (which has been renewed for a third season) is...