NYCC 2017: THE WATCHER BECOMES THE STUDENT 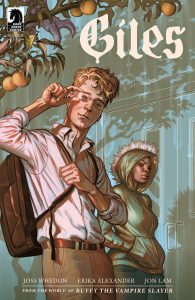 Buffy the Vampire Slayer: Giles finds Rupert Giles returning to high school! But this time—as a grown man living in a teenage body—Giles will be a student instead of a teacher. At an inner-city Los Angeles school, when a mystical influence is detected and teachers start to go missing, Giles enrolls to investigate. What he finds is more than vampires and demons . . . something unusual and frightening is happening here. If Giles can get through one day as a student, he’ll have a chance to find out who, what, and where, but high school is still hell.

The first issue of Buffy the Vampire Slayer: Giles goes on sale February 28, 2018 and is available for preorder at your local comic shop. Visit DarkHorse.com for more information.

An All-Out Flerken Invasion Challenges Carol Danversto Go Higher, Further, and Faster Than Ever! IDW Publishing is proud to...

About A Series of Unfortunate Events Season 3: Based on the internationally best-selling series of books by Lemony Snicket (aka...

Adi Shankar, the nerd-icon producer behind Netflix’s highly successful Castlevania (which has been renewed for a third season) is...