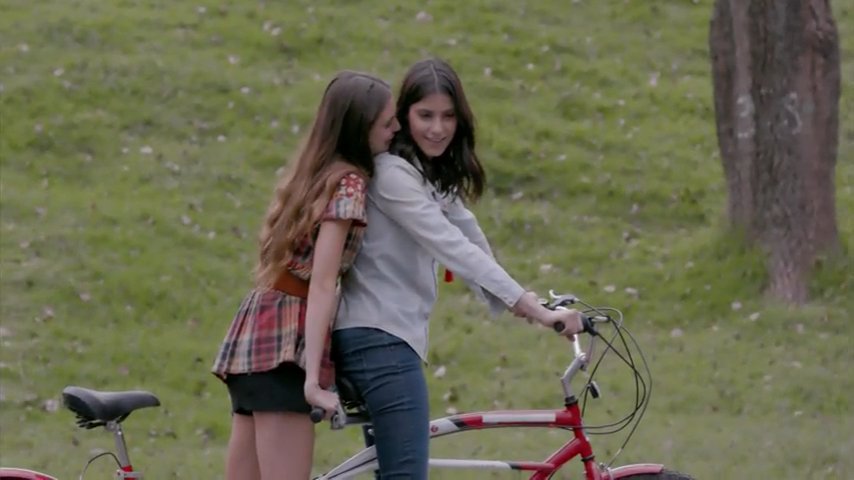 It’s not often that a telenovela makes waves in mainstream American media, but Amar a Muerte is swiftly changing that with the passionate fanbase dedicated to the relationship between two of the show’s primary character: Valentina Carvajal (Macarena Achaga) and Juliana Valdés (Bárbara López). The actresses picked the ship name “Juliantina” and it has since spread like wildfire with fans worldwide. With Amar a Muerte set to end soon, fans are desperately hoping for a spinoff so that we can see these two ladies story continue to grow – and we couldn’t agree more.

There are many Juliantina moments to love, as Macarena and Bárbara have sizzling on-screen chemistry – but below is a list of some of our favorites.

2. When Juliana taught Valentina to dance in the park and they adorably escaped security on a tandem bicycle.

3. The continual heart eyes Valentina gave Juliana long before either of them admitted how they felt (or maybe even realized it).

4. The night they spend together after the party at Valentina’s house. Valentina, definitely intoxicated, giggles her way through an attempt at practicing her dancing with Juliana. I was sure this would be their first kiss – sadly, they were interrupted, but it was a great scene nonetheless.

6. THEIR FIRST KISS. The whole scene was pretty cute already with Valentina teaching Juliana to swim, but the addition of their first kiss made it an unforgettable moment.

7. When they spoke at the hospital post-kiss and came to the realization that their love didn’t need to be labeled.

8. The first time they made love. STEAMY (literally – in a shower).

9. When Juliana stood up to her mom and fought for her relationship with Valentina.

10. The car scene(s) and how genuinely happy they are when they’re together.